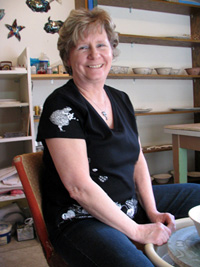 Darcy began her pottery career in 1993 by taking some night classes with a studio potter. She immediately realized that working with the magic of clay on the potter's wheel was something that would be immensely fulfilling.

She has taken many workshops in both functional and decorative pieces at North Island College and Pearson College, as well as specialized workshops and seminars from Gordon Hutchens (Denman Island) and Siegele and Haley, world renowned potters from Arkansas. Darcy also completed two specialized night school classes with Meg Burgess, refining and honing techniques already learned. 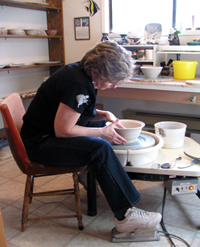 The transformation of a piece may go from bowl to plate to abstract before it reveals itself, which makes each of Darcy's pieces unique.

Not limiting herself to one medium, she has learned and crosses over between traditional thrown pottery to slab work, Raku and porcelin, often incorporating the theory of one discipline into another.

A passion for ocean themes, her attention to the intricate details of orcas, starfish and rockfish has earned her pottery prominence in some of the most exclusive resort destination venues.